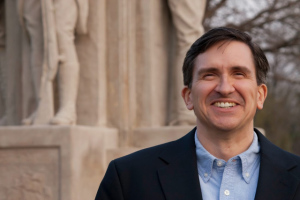 While many seasoned political observers believe that Democratic nominee Dave Domina, a wealthy trial lawyer, has already thrown in the towel in his uphill battle against Republican Ben Sasse in Nebraska’s lopsided U.S. Senate race, little-known Dan Buhrdorf — the longest of long-shots — wants his fellow Cornhuskers to know that he doesn’t give up without a fight.

You’ll never see a white flag of surrender from him.

At least not as long as millions of Americans are still suffering from the near-catastrophic financial meltdown of 2008 — a lingering economic crisis in which the final chapter has yet to be written.

Narrowly falling short in qualifying for a spot on the general election ballot as a third-party candidate in August, the scrappy Lincoln resident and longtime antiwar activist recently filed qualifying paperwork to become an official write-in candidate for the U.S. Senate.

Buhrdorf, a fifth-generation Nebraskan, was a participant at the UFAA’s founding conference in New York City in October 2012.