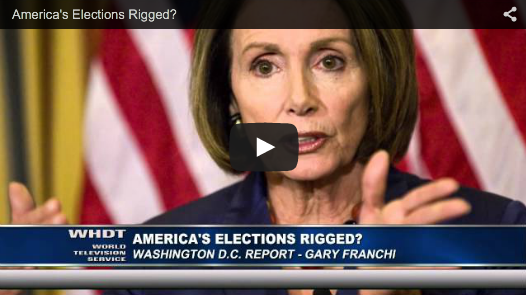 From a Free and Equal Elections Foundation email blast:

Gary Franchi, anchor of the NextNewsNetwork, investigated the nature of elections in America and if they are indeed tilted to favor establishment candidates and political parties.

Click here or on the image above to watch the report.

“When it comes to filling legislative seats in Washington, unless your name is tagged with a big ‘D’ for Democrat, or a big ‘R’ for Republican, you’re often treated like a ‘nobody,’” Franchi reported. “The independent candidate usually gets scant press coverage—and that’s assuming that the Democrat-Republican machine does not deny ballot access to independent contenders.”

The report alludes to a recent development regarding this issue when Christina Tobin, founder of Free and Equal Elections, interviewed John Dennis. Dennis ran for Congress 3 times against incumbent California Congresswoman Nancy Pelosi. Pelosi, a Democrat, is a former speaker of the House.

In 2010 during his first Congressional bid, Dennis held a “Principles Over Politics” rally with Dr. Ron Paul and 2008 vice presidential candidate Matt Gonzalez in front of San Francisco’s city hall. The rally was held to “call out” Pelosi for supporting the very same policies she claimed to be against as soon as the Democrats claimed their former House majority in 2006. Despite their own political differences, Paul and Gonzalez stood together to say that wars, public surveillance, and unhinged corporatism do not suddenly become acceptable just because a “new party” is in power in Washington.

The report continued: “When establishment politicians are asked to step “outside the box” and actually address issues in the real world, they usually run for cover,” Franchi observed. “So, true to form, this year Pelosi rejected a debate invitation from Free and Equal. The debate, slated for San Francisco’s Regency Ballroom back on October 16th, would have included Mr. Dennis. But here’s the twist: Dennis actually ran as an independently-minded Republican, yet Pelosi still declined to debate him. Free and Equal noted: “The debate would have . . . marked the first time since 1992 that . . . Congresswoman [Pelosi] appeared in a forum of any type with [any] opposing candidate.””

A combination of many factors do indicate that America’s elections are purposefully tilted towards establishment parties and candidates. A big role is played by the mainstream media, who are owned by 6 corporations who profit off the system staying the same and donate heavily to both major political parties. The media applies derogatory terms to alternative party and independent candidates, such as long-shot, spoiler, 1% vote-getters, fringe, wasted vote, if they even mention the candidates at all or their positions on the issues. This practice helps to pre-determine the outcome of the election. Voters usually don’t know about their other options, and if they do, they are psychologically conditioned to think that they are not worth their vote.

Add to the mix gerrymandered Congressional districts, restrictive ballot-access laws, Top Two primary systems, big money in politics, and the Electoral College, and you have a recipe for an elections process that is unfairly tilted towards Republicans and Democrats, when a majority of Americans now feel that neither major political party represents their values.

Free and Equal Elections calls for a level playing field where all ballot-qualified candidates have an equal voice in the media and debates, honest journalism is restored, and ballot-access laws are equitable to all candidates regardless of party affiliation. Only then can We The People elect the type of representation that will move this country and the world forward in a positive direction.

Help Free and Equal Elections continue to fight restrictive elections systems. Donate now to support our various initiatives to open our elections, debates, and media coverage to all ballot-qualified candidates.

Your donation of $25, $50, $100, $1,000, or more will go to a multifaceted grassroots movement that educates and inspires we the people to be the change and take action to enact long-term solutions.

With gratitude,
The Free and Equal Team