Posts tagged as “the caucus”

Green Party presidential candidate Jill Stein was interviewed by the New York Times today, for their blog The Caucus.  The full interview can be read here.

Q. Why are you running for president? 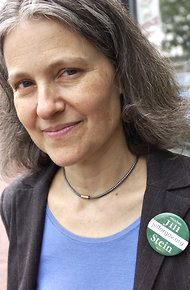 Michael Manning/Associated PressJill Stein, a Green Party candidate for president, during her campaign for governor of Massachusetts in 2002.

END_OF_DOCUMENT_TOKEN_TO_BE_REPLACED

On the New York Times blog “The Caucus”, a post entitled “Occupy Protestors Down on Obama, Survey Finds” has some interesting numbers for Greens:

Dr. Panagopoulos described the protesters as “disgruntled Democrats.” Sixty percent of those surveyed said they voted for Barack Obama in 2008, and about three-quarters now disapprove of Mr.