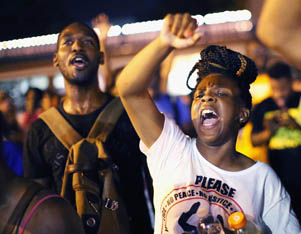 The death of Michael Brown fueled protests against racist cops in Ferguson, Mo., including this one on Aug. 22, 2014. Scott Olson / Getty Images

Read the full article at the Freedom Socialist Party website.

No justice without radical change

“No Justice, No Peace!” This ringing slogan is close to the hearts of protesters marching against police abuse in Black and Latino communities in the USA. And today the chant expresses mounting global defiance against state repression, whether in the Middle East, Africa, Asia, Europe, or Latin America.

But Presidents Obama and Peña Nieto of Mexico, who warmly shook hands in Washington, D.C., in January, are doing their best to enforce “peace” without justice.

That won’t stop outraged revolts led by young Blacks and immigrants in the U.S. and indigenous youth in Mexico. The challenge now is to sustain momentu

It’s the system. The masses who have taken over streets and highways in Mexico and the U.S. know that the government creates the violence of everyday life. The police and military have a special role as the enforcers — but all parts of the state work together to ensure the rule of the capitalist economic system. Obscenely wealthy businesses, including drug cartels, depend upon this coercion to survive. On the home front, cops and prisons work to suppress rebellion and protect the banks and speculators — at all costs! Internationally, military occupations and wars destroy lands and lives to keep the imperialist powers on top.

What have these powers produced? A world of afflicted human beings, nearly half of whom struggle to survive on less than $2 a day. “Rest assured,” the experts tell us, “recovery is near and capitalism is good for eternity.” Lies! Life is getting worse, not better. Capitalism is designed to profit a privileged few, not to nourish a humane, productive, sane civilization.

Unbearable conditions are causing upheavals globally, and rulers are desperate to clamp down. Institutionalized racism plays a critical role in this effort, especially in the U.S., because it was founded and grew rich on the backs of Black slaves and immigrant workers. Embedded white supremacist policies in the U.S. are intended precisely to break solidarity across races. Racism is also active in Mexico, where, like in the U.S., indigenous communities are stigmatized, the better to undermine their rights and steal their land.

This we know: No working class divided by racism will ever pull off a revolution. The ruling class knows this too, as they watch vast multiracial upsurges with horror.